● With the Fed turning hawkish, equity markets retreated from their record highs set last Friday, both domestically and across the pond in Europe.
● Yields fell with equities for the week, the yield on the 2-year dropping slightly, down -1bps and the yield on the
10- year falling -7bps.
● Economic data for the week showed that inflation is still hitting manufacturers hard with PPI coming in hotter than expected and housing data showed that the real estate market is still running red hot with both Housing Starts and Building Permits come in above expectations.

Retreating from last Friday’s record high, the S&P 500 was in the red almost everyday for the week, except for Wednesday when Fed Chairman Powell made remarks after the Federal Reserves meeting. To combat runaway inflation, Powell announced that the Fed will accelerate the pace at which they are tapering their asset purchase program, increasing the reduction from $10 billion to $20 billion per month starting next month. After the dust had settled, the S&P 500 lost -1.94% for the week, with Small Caps, as measured by the Russell 2000, right behind it, down -1.71% for the week. The tech heavy Nasdaq faced the worse of the selling pressure, falling -2.95% for the week. European equities, as measured by the STOXX Europe 600, were down slightly -0.35% for the week after the European Central Bank (ECB) also announced a tapering to their asset purchases, but also promised that additional stimulus would be coming. Japanese equities, as measured by the Nikkei-225, was able to cling onto positive territory for the week, up +0.38%. With the week turning negative, a Santa Claus rally is in jeopardy, but not impossible. Looking out the next week, market participants will be looking to GDP numbers, as well as personal income and spending data releases. 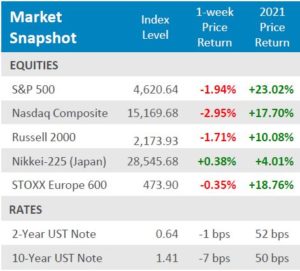